The knee is a dynamic joint with multiple moving parts and articulations. In addition to the thigh bone and shin bone, the kneecap is an important and often overlooked part of the knee joint. Kneecap dislocations or patella instability represent 2% of all knee injuries, however, they are the second most common cause of knee joint swelling. Like any other joint in the body, stability of the knee is conferred by the ligaments, muscles, and bone anatomy. If someone experiences a dislocation of the kneecap, or patella instability, any or all of the 3 aforementioned structures may be affected. Below we review the bone, muscle, and ligament anatomy around the kneecap and their contribution to knee stability.

X-ray of a normal groove or trochlea for the kneecap

X-ray of a normal groove or trochlea for the kneecap

For majority of people, the kneecap’s shape is complimentary to the groove. Much like a train moving down a train track, a kneecap travels in the trochlea with knee motion. Some people are born with a trochlea that is too shallow. With a shallow groove (see X-ray example), there is less restraint of the kneecap as it moves across the front of the knee and a small force may be enough to displace the kneecap or cause it to “jump the track”.

Consequently, people with a relatively shallow trochlea are predisposed to patellar instability. 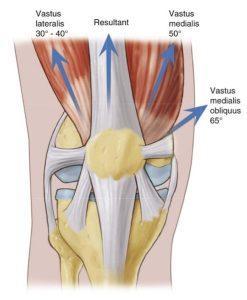 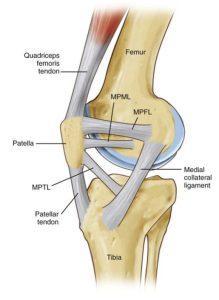 Ligaments around the kneecap viewed from the side of the knee 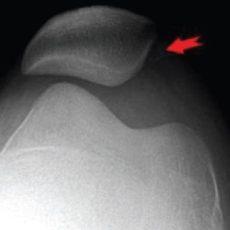 X-ray of lateral patellar tilt. Excessive tension in the tissues on the outside of the knee cause the kneecap to move asymmetrically in the groove.

Sometimes excessive tissue tension causes the kneecap to tilt in the groove and produces an eccentric amount of force concentration on one side of the kneecap, as opposed to it being evenly distributed across the kneecap within the groove (see X-ray example).

On the medial side, a thickening of the capsule and retinacular tissues exists near the superior pole of the patella that extends to the inside aspect of the knee forming the medial patellofemoral ligament or M.P.F.L. This structure plays an important role guiding the kneecap into the groove of the trochlea as the knee begins to flex. This cord like structure helps guide the kneecap into the groove and provides a restraint to excessive lateral translation of the kneecap. After a kneecap dislocation, this structure is often stretched or torn. Therefore, if the kneecap slips out of position once, then there is a greater probability the kneecap may dislocate again.

There can also be an inherent “looseness” or laxity in the ligaments around the knee that can predispose one to kneecap dislocation. Some genetic connective tissue disorders such as Ehlers-Danlos Syndrome or Marfan Syndrome, can lead to ligaments that stretch very easily with minimal force. Often patients with these conditions have other joints that are unusually loose with the ability to bend and contort more than the average person. A patient with loose connective tissues may commonly characterize themselves as “double-jointed”. Signs of unusually loose ligaments include elbows that hyperextend, wrists that can flex down to the forearm, or little fingers that can be pulled all the way backwards. When ligaments are loose, their capacity to limit joint motion is diminished. Around the kneecap this can manifest as patellar instability.

X-ray of a dislocated kneecap. Note the kneecap sitting outside the groove it belongs in.

For someone with normal anatomy, it is very difficult to dislocate the kneecap or experience patella instability. A traumatic incident is usually what precipitates a kneecap dislocation. For the dislocation to occur, at least one of the three elements described above- bone anatomy, ligaments, or muscle balance– must give. Treatment focuses on identifying and treating the affected anatomy. Most commonly, muscles are strained and ligaments sprained. Often when a kneecap dislocates, it pops back into place on its own. If the kneecap is stuck dislocated (see X-ray example), it must be relocated back to the groove where it belongs. This is often done in the emergency room with the help of anesthesia to relax tense and injured muscles. Once the kneecap is realigned, swelling and pain develop. Even a partial dislocation, called a subluxation, produces pain and discomfort.

An orthopedic physician should be involved in the care once the injury is recognized. After the initial swelling and pain are controlled, rehabilitation of the muscles through physical therapy is used to re-establish muscle balance and appropriate patella tracking. If swelling persists after the injury, there may be damage of the cartilage under the kneecap that requires further investigation and immediate attention. After the initial patella dislocation, there is a higher propensity for repeat kneecap dislocation. If rehabilitation of the muscles are inadequate or the ligaments are stretched, a minor trauma or quick movement maybe all that is necessary to cause another kneecap dislocation. Repetitive dislocations of the kneecap, known as patella instability, can increase the risk of cartilage damage and long term joint problems. Therefore, if the kneecap continues to dislocate, in spite of aggressive rehabilitation, surgical treatment options for restoring constraining anatomy are recommended.

If you suspect you had a kneecap dislocation, please call 281-690-4678 to make an appointment today for an individual consultation. Dr. Dewan will review your history, perform a thorough physical exam, and likely obtain some imaging to determine the best treatment plan for you.

Font Resize
Contrast
Accessibility by WAH
Call Us Text Us