The anterior cruciate ligament (ACL) is within the knee joint with a limited blood supply. After it tears, it does not heal itself. The torn fragments may scar scar back together, but without the appropriate tension, the ACL is unable to provide the knee anterior and rotatory stability. Historically attempts were made to repair the torn fibers of the ACL directly with sutures and stitching. This however did not confer enough tension in the ACL and ultimately failed. New research has focused on using biological scaffolds or stem cells injected directly on the ACL to promote healing. None of these new approaches however have made it to final clinical testing successfully. To restore knee stability, the current standard of care involves replacing your torn ligament with a substitute made of tendon. Tendon and ligaments are both made of collagen protein. When used for ACL reconstruction, the tendon is called the ACL graft. The graft serves as a scaffold on which new ligament tissue can grow.

Types of ACL Graft for Reconstruction 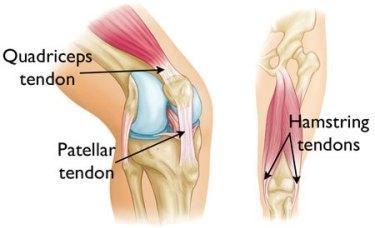 Tissue to reconstruct the ACL can be obtained from the same knee at the time of surgery, and in some cases from the opposite knee. Common sources of ACL graft used currently for reconstruction include-

This ACL graft source is often referred to as the “gold standard” for ACL reconstruction. The middle third of the patellar tendon along with a piece of bone from the kneecap and shin bone are dissected from the front of the knee. This graft source is recommended for high-demand athletes and patients whose jobs do not require a significant amount of kneeling.

The hamstrings that can be used for ACL reconstruction attach to the inside aspect of the knee. Generally two of the tendons (the gracillis and tendinosus) are harvested from the hamstring muscles. These tendons are used to create a two- or four-strand tendon ACL graft.

The quadriceps tendon autograft is often used as an alternative source of tissue when patients have failed previous ACL reconstruction with another autograft. The middle third of the patient’s quadriceps tendon and a bone plug from the upper end of the knee cap are used.

Cadaver grafts, or allografts, eliminate the need to use your own tissue as a graft. Until recently, allograft tissue was the goto graft source for many surgeons. New studies however have shown higher rates of failure. Allograft tissue is an important source of graft tissue particularly for failed ACL reconstructions with autograft tissue and in surgery to repair or reconstruct more than one knee ligament. Many types of allograft tissue are available including patellar tendons, achilles tendons, hamstring tendons, etc.

To learn more on how the ACL grafts are implanted and secured during surgery, please visit my post on ACL reconstruction surgery.

Choosing the correct graft for your ACL reconstruction can be confusing. Feel free to ask more questions below in the comments, or call my office at 281-690-4678 to arrange a face-to-face consultation.

Font Resize
Contrast
Accessibility by WAH
Call Us Text Us